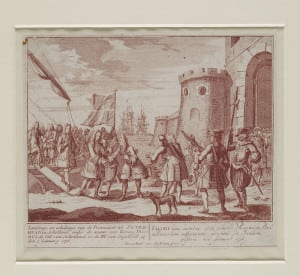 Saving lives may have been Sir Hans Sloane’s day job as a physician, but in one case he even saved a friend from the hangman: Patrick Blair, who had been sentenced to death for high treason.

A Scottish surgeon and botanist, Blair had known Sloane since 1705 after persuading a fellow Scotsmen to introduce him. Sloane and Blair corresponded for several years on diverse subjects, from botany, elephants, medical practices, books and more. But in the aftermath of the failed Jacobite rising of 1715, Blair also discovered the real importance of networking and patronage.

Britain was in a state of political upheaval for decades following the Glorious Revolution of 1688. James II may have been dethroned,  but his followers–Jacobites–repeatedly attempted to restore him to the throne. The Union of the English and Scottish parliaments in 1707 was resented by many in Scotland and strengthened Jacobitism.

Sloane, born a Presbyterian son of Ulster planters, was staunch Whig and loyal to the new royal family. Not only was his brother, James, a Whig Member of Parliament, but Sir Hans was a royal physician. In 1714, he had even attended Queen Anne upon her deathbed, prolonging her life long enough to thwart the schemes for a Jacobite restoration and to secure the Protestant Hanoverian succession.

Just one year later came ‘the Fifteen,’ a poorly organised Jacobite uprising in both Scotland and western England. Blair joined the revolt in Scotland as a surgeon, but was captured at the Battle of Preston and sent to Newgate Prison, London. He desperately wrote to his friends in the hopes of obtaining relief for himself and his suffering family.

my poor wife and children are in greatest misery and distress and that the very little they have to Live upon in Life to be utterly Lost so that they are Like to be reduced to a starving condition unless the Government shall see fit to show me their mercy and grant me relief.

A prisoner in a Newgate cell just a decade after Blair left. Image Credit: Wikimedia Commons.

In these pathetic pleas Blair also denies that he was ever truly a Jacobite, insisting that the rebels gave him no choice. One might suspect that Sloane found these claims a little hard to swallow given that he probably knew that Blair came from a Jacobite family and was religiously a Non-Juror–a member of the schismatic Episcopalian church who refused to swear allegiance to any but the exiled Stuarts.

It is only natural that Blair sought to preserve a sense of normality during this time of personal crisis. For instance, he sent Sloane a letter discussing their mutual botanical interests and his desire to do some gardening for Sloane, “I want to be serviceable to you for the obligations I received from you. The plants spring in my mind as fast as they do in the ground you proposed I might assist you with Last.”

Despite the efforts of his friends, including Sloane who visited him in prison, Blair was condemned to death following his guilty plea. He continued to beg for Sloane’s help.

But now having in the most submissive manner subjected myself to his majesty’s mercy I hope by your intercession… to obtain his most gracious pardon and Liberation … I therefore humbly crave you’l be pleasd to use your endeavours in that matter.

Blair had good reason to be frightened, as the Lord High Steward’s sentence of death against other rebels a few months earlier declared that they were to be brought from the Tower and:

drawn to the place of execution. When you come there, you must be hanged by the neck, but not until you are dead; for you must be cut down alive, then your bowels must be taken out and burnt before your faces; then your head s must be severed from your bodies and your bodies divided each into four quarters and these must be at the king’s disposal.[1]

Although most of the condemned had their sentences commuted to a ‘mere’ beheading, it’s unlikely that Blair would have been reassured. There was a distinct possibility that he could end up one of the relatively few Jacobites made an example of, either through execution or exile to the colonies. Although Blair hoped that Sloane could secure him a pardon, the government kept him waiting until midnight before his scheduled execution to inform him of his reprieve.

Afterwards, Sloane continued to support Blair financially by helping him to relocate and put his life back together.  This demonstrated not only the enduring value of wealthy and well-connected friends, but also how friendship could cross political and sectarian boundaries. Despite the polarised and often violent atmosphere of politics in this period, friendship and the higher cause of the Royal Society and Republic of Letters still trumped politics.

Of course, aside from simple friendship, cultivating these connections may have represented something of an insurance policy for Sloane, just in case the King over the Waters should ever follow in footsteps of his uncle Charles II and make a triumphant march into London.